The site, at the southern end of the Palos Verdes Peninsula, on the west side of San Pedro Bay, was used by Spanish ships starting in the 1540s. The peninsula, including all of San Pedro, was the homeland of the Tongva-Gabrieleño Native American people for thousands of years. In other areas of the Los Angeles Basin, archeological sites date back 8,000–15,000 years. The Tongva believe they have been here since the beginning of time.

Once called the “lords of the ocean” due to their mastery of oceangoing canoes – Ti’ats – many Tongva villages covered the coastline. The Tongva lived in a virtual paradise until colonization. Their first contact with Europeans was in 1542 with João Cabrilho (Juan Cabrillo), the Portuguese explorer who also was the first to write of them.

The Tongva called the San Pedro area “Chaaw.” Chowigna and Suangna were two Tongva settlements of many in the peninsula area, which was also a departure point for their rancherias on the Channel Islands. Legend has it that the Native Americans blessed the land of Palos Verdes, making it the most beautiful place on Earth.

Prior to the formation of San Pedro Lodge #332, the harbor area of Los Angeles County was served only by Wilmington Lodge #198, which was located approximately four miles from San Pedro. Other Lodges were located in Compton and Santa Monica.

Wilmington Lodge...the only Lodge in town

Looking north on Canal Street (now Avalon Boulevard) at Wilmington Lodge #198. This was the only Masonic Lodge serving the entire harbor area of Los Angeles.

In the years before the formation of the San Pedro Lodge, travel difficulties beset Masons living in San Pedro when they attended distant Lodge meetings. For Masons living in San Pedro, the nearest Lodge was located in Wilmington, which was quite a distance at that time. The Stated Meetings were held on Tuesdays – on or before the full moon – probably because moonlit nights made for safer travel by foot. Masons from San Pedro traveled at times by skiff to the foot of Canal Street when the tides were favorable; but when they were not, a frequent course was to walk over the San Pedro & Los Angeles Railroad trestle that spanned the mud flats extending from San Pedro to Wilmington. In later years, the flats were filled in with rock and dirt to form a mound, which shortened the trestles.

There were no night trains. In the early days, a spring wagon carryall, operated by Compton rancher William Henry Carpenter, was hired by the Masons living in San Pedro when a wagon road was passable. It conveyed 8 to 10 Masons to the Wilmington Lodge and waited for them until the Lodge adjourned. At a later date, when San Pedro Lodge was established, Mr. Carpenter was initiated and frequently served as Tyler.

When a brother was raised as a Master Mason in Wilmington Lodge, it was customary for him to provide the banquet, and usually other brothers brought a couple of kegs of beer – or even a little hard liquor to enliven the occasion. This could make for a very long evening with dangerous travel afterward.

Worshipful Brother Edwin E. Young, Past Master, in his memoirs said that after the Long Beach Lodge was formed (at about the same time as the one at San Pedro), it was a custom to borrow a handcar from the Los Angeles & San Pedro Railroad (later the San Pedro, Los Angeles & Salt Lake Railroad), or even a locomotive and go to and from San Pedro by those means. But if no handcar or locomotive was available, they rode over to Wilmington on the afternoon train, and then trudged home along the Terminal Road beach at night, which was a rather rough walk. 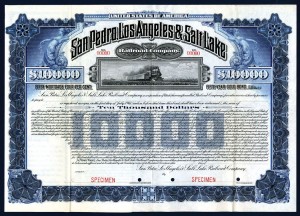 Stock Certificate for the San Pedro, Los Angeles & Salt Lake Railroad. It was Southern California’s first railroad. Its 21 mile line from San Pedro Bay to Los Angeles was built from 1868 to 1869 and began operations on October 26, 1869.

The line was purchased by the Southern Pacific Railroad in 1873; and the Salt Lake spur, which ran through Las Vegas, was added once the City of San Pedro was annexed to the City of Los Angeles in 1909. 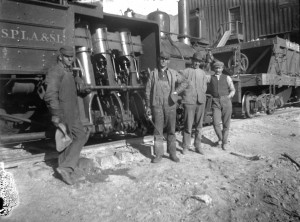 The San Pedro & Los Angeles Railroad ended in San Pedro Bay. This view from 1905 looks east   at the main channel of the harbor and towards East San Pedro (now Terminal Island). Dead Man’s Island can be seen on the right in the distance. 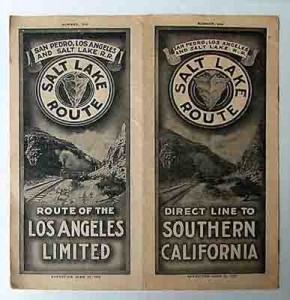 When it was decided to form a new Lodge in San Pedro, after receiving the endorsement of the Wilmington Lodge members, preliminary meetings and discussions were held in San Pedro at the real estate office of Worshipful Brother Daniel R. Clay, Past Master, who was Master of Wilmington Lodge #198 in 1896. The office was located between Sixth Street and Seventh Street on Beacon Street, about 100 steps up from Beacon Street to the section then known as Vinegar Hill.

The first organizing meeting was held on 17 June 1897, followed by others on 9 July and 16 July. A Petition for Dispensation to form and open a new Lodge, in San Pedro, was submitted to Grand Master William Thomas Lucas under the date of 13 July 1897.

On 28 July 1897, the first Lodge meeting held under Dispensation was held in the Eagles’ Fraternal Hall located on Front Street, at about the middle of the block between Fifth Street and Sixth Street, over Levi’s Store which occupied the ground floor of the building. 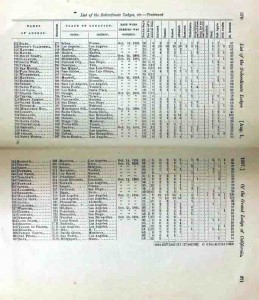 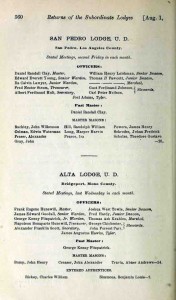 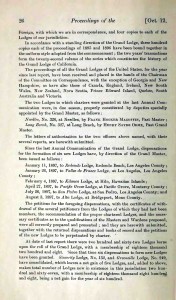 1897 Proceedings of the Grand Lodge of California showing the application for a Dispensation to Form a Lodge, the Chartered Members, and the original fees of the Lodge. It cost $30 to apply for the Degrees. Annual dues were $6, with an additional $4 for each of the Degrees.

Under this Charter, the first official meeting of San Pedro No. 332 was held on 29 October 1897. At this time, the Lodge was regularly constituted by the Acting Grand Master, Charles E. Mitchell, Grand Lecturer of the Grand Lodge of California.

In 1897, the Grand Lodge of California required a new Lodge to have at least one Past Master as a Charter Member in order to conduct business. Worshipful Brother Daniel R. Clay, Past Master, accepted that role and served as the first Worshipful Master to the end of the year, whereupon Edward E. Young was elected as his successor and served as Worshipful Master for the year of 1898. Brother Ila C. Lawyer was elected and served for the years 1899, 1904 and 1907. At the beginning of the 1898 year, there were 20 members on the roster, and for the 29 meetings held during the year, the attendance averaged 19.7 men per meeting – an almost 100% attendance record.

The first initiate was John Wilkenson Buckley, foreman of the San Pedro Lumber Company. The second initiate was Theodore Gustave Schultze, a blacksmith. Both received their Entered Apprentice Degree from the Lodge, under Dispensation, on 13 August 1897. The next Degrees were given to Harper Marvin Long, a plumber, and John Gray, a shipping clerk, who were made Entered Apprentices on 10 September 1897, with other men following shortly thereafter.

These are the Charter Members of San Pedro Lodge #332. Click on their names to view their biographies.

Throughout its history, San Pedro Lodge #332 seems to have been as liberal in its rejections as in its elections.

To inform members of the meetings in its early days, a blue flag with white Square and Compass was flown from the flagpole of the Fraternal (Eagles’) Hall on meeting days, which everyone in the small village could see. Along about 1901, the Lodge moved from Front Street to the Odd Fellows’ Hall, located on Fifth Street, but the town grew and as the need for a Masonic Hall increased, the Lodge saw its own Cornerstone laid at 221 Sixth Street on 16 July 1916 by the Grand Master, William Rhodes Hervey, and his corps of Grand Lodge Officers. Brother Harry Weaver was Master from then to the end of the year, and Brother Robert Irwin followed for the first full calendar year of occupancy in this first Masonic Hall in San Pedro.

In the autumn of 1946, the Sixth Street building was vacated after a sale to Catholic bodies, because the location had become unsuitable. For several years thereafter – until in 1958 – the Lodge rented quarters in the Odd Fellows’ Hall on Gaffey Avenue and Tenth Street in San Pedro.

A new Hall construction was undertaken on property located on the 1600 block of West Ninth Street, with the groundbreaking taking place on 2 April 1955. On 6 April 1956, the Grand Master, Edgar V. Stewart, Jr., and the Officers of the Grand Lodge of California laid the cornerstone. At the time, Brother James L. Hendrix was the Worshipful Master of the Lodge.

Occupancy of the new Hall was begun under the administration of Brother Fred S. Cain, Worshipful Master, on 12 April 1958. Virtually all Past Masters of the Lodge living in the area, and a group of about 14 sojourners who represented every organization and Degree in Freemasonry from the Entered Apprentice to the 33rd Degree and all the other Rites, entered and took up residence in the building.